Moving Image: Performance, the related video exhibition exploring the relationship between the camera and the action it records, on view through July 24, 2017

Moving Image: Performance, the related video exhibition exploring the relationship between the camera and the action it records, on view through July 24, 2017 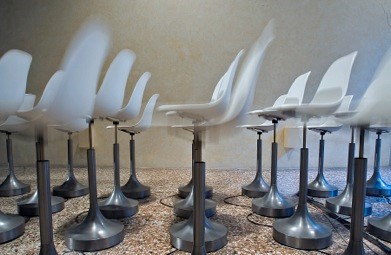 Drawn from the Borusan Contemporary Art Collection in Istanbul, Turkey, two complementary selections of works rooted in performative action will be on view at the University of Michigan Museum of Art (UMMA) through July 2017. On view April 22 ‒ July 30, is Wavefunction, Subsculpture 9 (2007), a kinetic sculpture and interactive installation by Rafael Lozano-Hemmer playing on the work of mid-20th-century American designers Charles and Ray Eames. It accompanies the exhibition Moving Image: Performance, on view through July 24, 2017, comprising a compilation of four videos by artists Elena Kovylina, Kalliopi Lemos, Roman Signer, and Universal Everything that investigates the relationship between the video camera and the action it records. The exhibition reveals how these artists use dynamic technologies—including digitized images and video—to explore the genre. 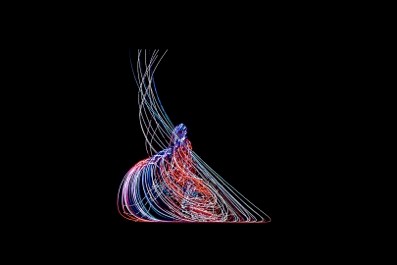 Both presentations were organized by Kathleen Forde, Borusan Contemporary’s Artistic Director at Large, and UMMA’s Adjunct Curator of Media Arts, as part of a suite of exhibitions representing traditional categories—landscape, performance and portraiture—that find new resonances when explored through the strategies of dynamic technology.

Wavefunction, Subsculpture 9 consists of 42 molded plastic chairs (designed by the Eameses in 1948) arranged in a grid and attached to electromechanical pistons set into metal bases. When visitors approach the chairs, a surveillance system detects their presence and the closest chairs lift gently into the air on the pistons. Adjacent chairs follow, rising up and down, creating a wave-like motion across the grid of chairs. The software controlling the pistons is based on fluid dynamics, so as more visitors approach the grid, the chairs—whose iconic curving contours were also generated mathematically—mimic the complex interaction of multiple waves in water.

“In his practice, Lozano-Hemmer investigates his interest in performance within architectural space. A principal interest is creating platforms for public participation and, as with other works in the Subsculpture series, the behavior of humans in relation to the installation is its key element,” said Forde. 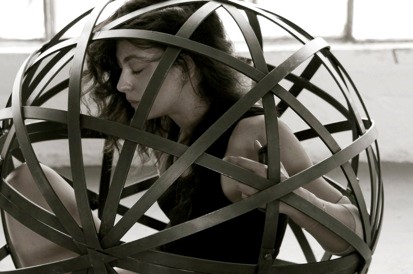 Moving Image: Performance features four international Iartists. German/U.K. artist Kalliopi Lemos’s At the Centre of the World (2015), positions the camera as a dynamic witness to the efforts of its subject, a woman seemingly caught in a spherical cage whose movement is an ambiguous mix of struggle and choreography. By contrast, in Swiss artist Roman Signer’s 56 Kleine Helikopter (2008), the camera is a static observer of the humorously chaotic action of toy helicopters. In Russian/French artist Elena Kovylina’s Equality (2014), the camera collaborates in a staged procession of people and props that references questions of inequality in contemporary Russian culture. In Presence 4 (2013) by the U.K. digital art and design collective Universal Everything, the camera recedes while the action becomes purely virtual, as a live dance is translated into a digital abstraction.

“At their core, these works are examining the fundamentals of how the moving image operates; how we, as viewers, consume it; and how its use affects our perception of the content and meaning it delivers. All four artists are not only presenting an action by way of the camera, but also an argument about how the tools of their art function. The performance, dance, and action captured in these videos are vastly different experiences for viewers than if they were witnessed in real life. Instead, we are offered a uniquely mediated and manipulated relationship to time-based behavior,” said Forde.

Moving Image: Portraiture (July 29‒November 26, 2017) is the final exhibition in the series drawn from the collection of Borusan Contemporary. It will present a contemporary spin on traditional notions of portraiture featuring work by Hannu Karjalainen, Daniel Rozin, and Marina Zurkow.

Rafael Lozano-Hemmer was born in Mexico City in 1967 and earned a B.S. degree in physical chemistry from Concordia University in Montreal in 1989. His large-scale interactive installations have been commissioned for such events as the pre-opening exhibition of the Guggenheim in Abu Dhabi in 2015; the Vancouver Winter Olympics in 2010; the 2008 memorial for the Tlatelolco Student Massacre in Mexico City; and the U.N. World Summit of Cities in Lyon, France, in 2003. Recently the subject of solo exhibitions at the San Francisco Museum of Modern Art, Museo Universitario Arte Contemporáneo in Mexico City, and the Museum of Contemporary Art in Sydney. Lozano-Hemmer was the first artist to officially represent Mexico at the Venice Biennale with a solo exhibition in 2007.

Borusan Contemporary is a multi-platform program of exhibitions, events, educational activities, new commissions, and site specific installations rooted in the Borusan Contemporary Art Collection in Istanbul, Turkey. These activities are defined by their specific focus on media arts broadly defined, i.e. artists who work with time, light, technology, video, software, and beyond. Most of the program takes place at Perili Köşk Istanbul, and co-exists with the offices of Borusan Holding, in essence creating a unique museum in an office setting. The entire building including the galleries, office space, café, Borusan Art Store, and outdoor terraces with breathtaking views of the Bosphorus is open to the public on weekends.

University of Michigan Museum of Art

One of the leading university art museums in the country, UMMA was established in 1856, moved to its current location in 1910, and added the Frankel Family Wing in 2009. The Museum’s collection—African; American; Asian; European; Middle Eastern; modern and contemporary; and prints, drawings, and photography—is of exceptional breadth, comprising more than 21,000 objects that span cultures, eras, and media. Works from Whistler and Picasso to Nevelson and Gates, Chinese and Japanese paintings and ceramics, and sculpture from central Africa are among the finest in North America. Special exhibitions, gallery installations, innovative interpretive strategies, and programming showcase UMMA’s collections. The Museum—among the oldest university art museums in the nation—serves as the catalyst for cultural understanding at the University of Michigan and the Ann Arbor community, and is a physical and virtual destination for scholars and art-lovers from around the globe. Admission is free.

Kalliopi Lemos, At the Centre of the World, 2015, 16mm B&W film with sound, running time 8 minutes 29 seconds, edition 1/5. Courtesy of the artist and Gazelli Art House.