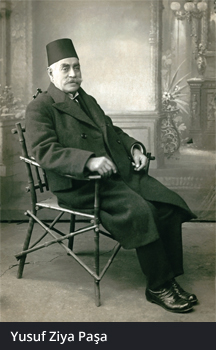 The "Haunted Mansion", or Perili Köşk, is the building that serves as the headquarters for Borusan Holding as well as its museum of contemporary art. It has a long and important history. Construction of the Yusuf Ziya Pasha mansion, which is among the leading examples of Istanbul's rich architectural heritage and one of the most significant historical buildings in the charming Rumelihisarı neighborhood along the Bosphorus, began in 1910s. Yusuf Ziya Pasha worked on the project with the khedive (Turkish viceroy to Egypt) Abbas Hilmi Pasha as a consultant. However, when World War I broke out in 1914 and the Ottoman Empire joined the conflict, all construction workers were forced to quit their jobs and enlist in the army. Consequently, construction on the building came to a standstill. Because the construction of Perili Köşk was largely unfinished, the second and third floors remained empty. Hence, the local community began referring to the property as the "Haunted Mansion.”

Later, from 1995 to 2000, architect Hakan Kıran completed the building's survey, construction and restoration processes. The stone and brick coating of the facade was finished in harmony with the original architectural plan after the brick materials were imported from England. According to the specifications of the project, 2,800 m³ of concrete and 350 tons of iron were used in the construction. While preserving the external appearance of the mansion, the internal spaces were arranged so as to provide a modern and spacious business environment. The ten-story building boasts views of both the Black Sea and Marmara Sea from its spectacular roof.

Borusan Holding began using Perili Köşk in February of 2007 and has a long-term lease agreement on the mansion extending until the end of 2030.