Notion of the mediated landscape explored in Moving Image: Landscape on view through March 26, 2017 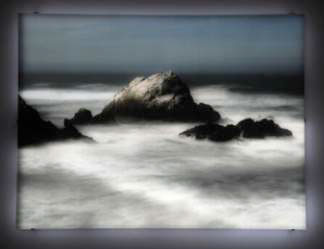 Drawn from the Borusan Contemporary Art Collection in Istanbul, Turkey, an exhibition of time-based works by artists Jim Campbell, Antti Laitinen, Joanie Lemercier, and Rick Silva is on view at the University of Michigan Museum of Art (UMMA) through March 26, 2017. Moving Image: Landscape, the first in a series of three consecutive exhibitions presented at UMMA, reveals how these artists use dynamic technologies—including digitized images and video—to explore the genre. The exhibition is organized by Kathleen Forde, Borusan Contemporary’s Artistic Director at Large.

Jim Campbell, a San Francisco-based artist, began his artistic career in filmmaking but switched to electronic sculpture in 1990 and started making his iconic LED matrix works in 2000. Campbell’s recent body of work, including Seal Rock (2010), presents pixilated images of landscapes created with grids of LEDs. The low-resolution LEDs create a tension between representation and abstraction, forcing viewers to find new ways to identify and interpret what they are seeing.

In the multi-channel video, It’s My Island (2007), Finnish artist Antti Laitinen builds his own island in the Baltic Sea by dragging two hundred sand bags into the water over a period of three months. The work explores ideas of nationality, citizenship, and identity as the artist creates his own single-citizen micro-nation. Laitenen’s previous work includes sculpture, performance, and art installation. 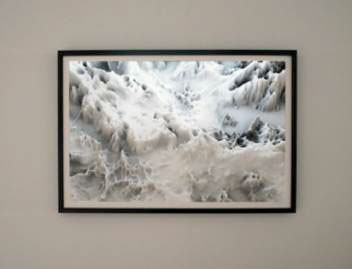 French artist Joanie Lemercier’s work is primarily focused on projections of light in space and its influence on our perception. His computer-generated print Landform 10 (2015), uses patterns of black dots and projected light to create the illusion of three-dimensionality and movement when seen from a distance. The effects are more realistic than a still image, but still unsettlingly artificial. 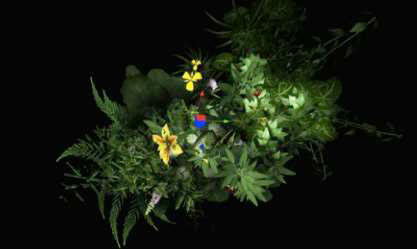 “We now live in a context where the digital world is our physical world. Landscape, as we understand and experience it, can be located, aesthetically and psychologically, in both technology and nature. Technology is also our ‘natural’ world. As recently as a decade ago, the novelty of these four works would have been their principal feature. Today, however, in a society that now includes a generation of digital natives (those born after the internet became commonplace), digital production is not novel. These works take their natural place in the established genre of landscape art, and are perhaps the purest reflection of the multi-faceted environment we live in,” said Forde.

Upcoming exhibitions in the series are:

Moving Image: Performance (April 1–July 23, 2017) presents four artists who investigate the relationship between the video camera and the action it records: Elena Kovylina, Kalliope Lemos, Roman Signer and Universal Everything.

Wavefunction, Subsculpture 9 (April 22‒July 30, 2017) is a kinetic sculpture and interactive installation by Mexican-Canadian artist Rafael Lozano-Hemmer that plays on the work of mid-century American designers Charles and Ray Eames.

One of the leading university art museums in the country, UMMA was established in 1856, moved to its current location in 1910, and added the Frankel Family Wing in 2009. The Museum’s collection—African; American; Asian; European; Middle Eastern; modern and contemporary; and prints, drawings, and photography—is of exceptional breadth, comprising more than 21,000 objects that span cultures, eras, and media. Works from Whistler and Picasso to Nevelson and Gates, Chinese and Japanese paintings and ceramics, and sculpture from central Africa are among the finest in North America. Special exhibitions, gallery installations, innovative interpretive strategies, and programming showcase UMMA’s collections. The Museum—among the oldest university art museums in the nation—serves as the catalyst for cultural understanding at the University of Michigan and the Ann Arbor community, and is a physical and virtual destination for scholars and art-lovers from around the globe. Admission is free. umma.umich.edu