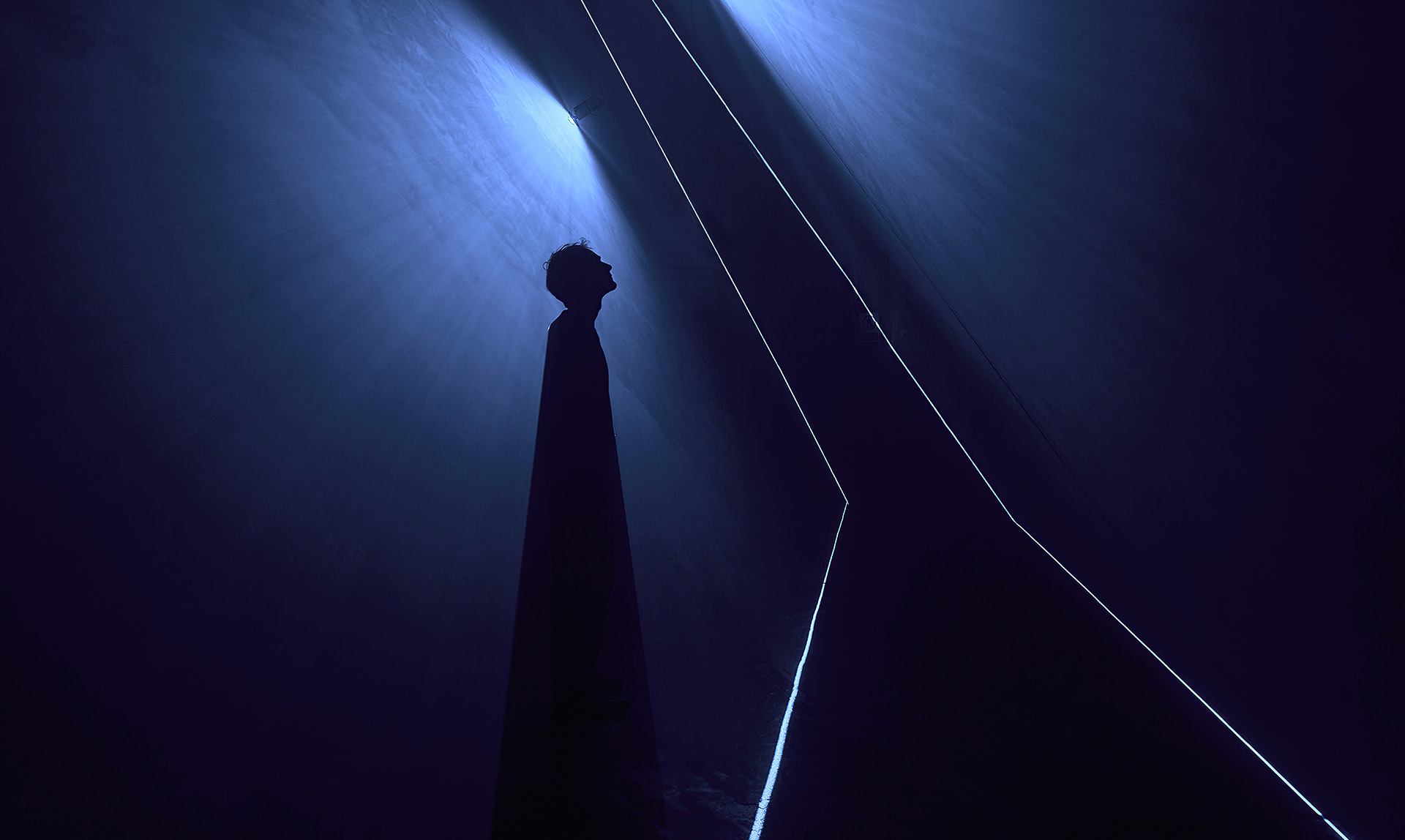 For almost 20 years the London-based collective United Visual Artists (UVA), founded by British artist Matt Clark, has been investigating the nature of perception and cognition, inviting us to contemplate the universality and subjectivity of experience. UVA’s diverse body of work includes sculpture, performance, and site-specific installation, incorporating new technologies to create novel instruments that manipulate and expand our sense of what is real. Light and sound become physical material, architectural environments become malleable and fluid; time speeds up, slows down, and seemingly hangs in suspense. UVA’s work ignites our sensory apparatus in ways that confound, delight, and inspire curiosity about the unknown and the unknowable.

Unfolding as intricate performances of form and movement, the works in Edge of Chaos take us on a journey from the cosmic to the mundane. Traversing through subject matter as wide-ranging as astronomy, theoretical physics, natural phenomena, computational culture, and human psychology, UVA explores the bounds of knowledge and meaning-making in an age where human cognition is increasingly being augmented by artificial intelligence. The desire to know the world and understand our place in it is a timeless pursuit. As our world grows increasingly complex, awash in a torrent of information and misinformation, the question of how we create order out of chaos and meaning out of data—as well as how our technologies mediate and influence our subjective experience of reality—has never been more relevant.

For millennia, humankind has studied the world around us in an effort to decode the mysteries of existence and derive meaning from seemingly random and chaotic events beyond our control. Ancient civilizations dating back more than 30,000 years mapped the movements of celestial objects in order to predict phenomena such as rain, drought, seasons, and the flow of tides. These patterns became the basis for astronomy, science, mathematics, and mythology, as well as for countless spiritual belief systems. The two immersive installations on the 2nd floor, Phases and Vanishing Point 3:1 #3, explore this sense of order in the universe.

In Phases, a set of custom kinetic sculptures traces resonant frequencies and synchronicities occurring at the cosmic scale and how they relate to our sense of harmony. Drawing inspiration from the movements and correlations of planets, the work physicalizes invisible energetic forces, such as gravity, and explores the tensions that arise when they descend into discordance. Moving from the celestial to the terrestrial, Vanishing Point 3:1 #3 plays with the rhythm of proportions, the harmony of form, and the interaction of color in an improvisational meditation on perception. Each line, shape, and color plays a role in constructing this generative audiovisual symphony. A rule-based system endlessly assembles and re-assembles fundamental elements into new abstract formations and harmonic sequences, producing novel compositions in a collaboration between man and machine. Light itself becomes an instrument here as color frequencies are expressed through corresponding sounds. In a nod to Bauhaus principles of design, simple geometric shapes protrude and recede, occasionally giving the illusion of depth and spatial configurations that seem almost solid but, ultimately, betray their instability and flicker, vibrate and dissolve.

The ability to perceive, analyze, organize, and communicate patterns of information from our environment is one of the defining traits of human intelligence. It is also one of the defining traits of machine intelligence, which has been fashioned after our own. Throughout UVA’s multimedia practice, which frequently employs custom software and programmatically controlled kinetic sculptures, the dynamic interplay between man and machine becomes a source of emanant creative potential. But while a machine intelligence may rival our capacity for pattern recognition, the ability to derive meaning and find a signal in the noise still relies on human interpretation. On the 4th floor, three series of works investigate how the nature of cognition, comprehension, and creativity is transformed by an increasingly automated world.

Etymologies draws on the writings of Freud and Jung, two groundbreaking psychoanalysts who dealt with the subconscious, generating new poetic compositions through the algorithmic reordering and relinking of their texts. Present Shock confronts the viewer with a barrage of statistical clocks representing real-time information about the world—from life-changing global events to the banal trivia of everyday existence—highlighting how the speed and volume of data in the Information Age present new challenges for our limited cognitive apparatus. In the final room, three Flux Paintings provide a moment of respite and contemplation. The monochromatic canvases, reminiscent of early cyanotype photography or abstract expressionist paintings, appear to “self-paint.” The works are in a constant state of becoming, subtly evolving, and changing over time, with new textured forms and configurations appearing as if painted by an invisible hand. The changes occur at a rate that is barely perceptible without the proper attunement—look away and look back, and the composition will be slightly different. They invite an active presence and focus that seems almost antithetical to the hyper-speed pace of the modern world. Yet through sustained attention, they may reward us with that elusive pearl of insight sought by countless artists and scientists through the act of patient observation—a glimpse at the mysterious self-organization and order that emerges at the edge of chaos.