“Though all the photographs of a city taken from all possible points of view indefinitely complete one another, they will never equal in value that dimensional object, the city along whose streets one walks. All the translations of a poem in all possible languages may add nuance to nuance and, by a kind of mutual retouching, by correcting one another, may give an increasingly faithful picture of the poem they translate, yet they will never give the inner meaning of the original. A representation taken from a certain point of view, a translation made with certain symbols still remain imperfect in comparison with the object whose picture has been taken or which the symbols seek to express. But the absolute is perfect in that it is perfectly what it is” 1

In my fifth text, I wanted to continue the Close Reading Series with Axel Hütte’s photograph titled Hierapolis, Night (2017) after a long break. I had the chance to observe the artistic practice of Hütte previous late April in a comprehensive manner with his exhibition opened at Borusan Contemporary’s venue in the Haunted Mansion.

Considered an influential name in the world of photography, Axel Hütte (1951- ) is an artist who came up through the Düsseldorf School. The artist couple Bernd and Hilla Becher founded the school in 1959 with their photographing activities of nearby industrial structures. The couple photographed various architectural buildings with their large format cameras according to their own specific standards and their first students in the academy became prominent names subsequently in the art of contemporary photography. Alongside Hütte, these names include Candida Höfer (1944-), Thomas Struth (1954-), Andreas Gursky (1955-) and Thomas Ruff (1958-). 2 Today members of this group are considered international artists. Like his professors and the other photography artists associated with the school, Hütte started shooting photographs with large format cameras. He states the fact that he was required to change the technical equipment regularly almost every three years during that period, motivated him to embark on experimental works. 3

Curator Hans Irrek had proposed to name Hütte’s exhibition at the Borusan Contemporary as Chronostasis. In Latin “kronos” means time and “statis” means to stop. When these two words merge, they refer to a temporal illusion in which time appears to be on hold in the first impression. 4 Such a proper title for an exhibition by an artist who claims to create an illusion of timelessness rather than the timelessness itself.

As Irrek emphasized during the press tour, Hütte’s works can be associated with “contemplative photography” which is a concept proposed by Michael Wood. He argues that the concept is related to attentive observation, and it means to be together with something in an open space. Wood talks about a practice of photography that is formed by releasing the mental activities which hinder natural insight and mindfulness. 5 The contemplative approach carries the potential to teach creating images based on new perceptions rather than accentuating the subject or the technical aspects of photography. Hütte’s definition of photography is worth remembering at this point. According to Hütte, photography is the gist of a lived moment or rather the transformation of it. It evokes the moment in which the wandering gaze is ground to a halt, and it tries to convey to its audience the feeling of astonishment that caused the gaze to stop in the first place. What is crucial here is the imagination spurred by the photograph both for the artist and the viewer. 6

As I wandered the exhibition, I realized the series that is the most sterile and powerful in its documentary quality showcased the ancient city photographs. I left the venue with some questions in my mind: why do we read these photographs in the context of “contemporary art of photography” even though they do not display any movement, human figure, or current event whatsoever? What differentiates Hütte’s photographs from charming cityscapes with a touristic appeal? What does the artist want us to see in them?

In Hütte’s photograph titled Hierapolis, Night, we see an ancient theater in a horizontal view. We face an ancient Roman theater whose construction took 150 years, and it is 1800 years old now. Hierapolis ancient theater is one of the most spectacular Roman theaters in Anatolia. We encounter frequently the majestic photographs of this structure with a birds-eye view yet in Hütte’s photograph the seating area is omitted. 7 The surface of the photograph is almost completely covered with skene—which means “tent” in Greek—in the other words the back of the stage. In the beginning, this part was only a booth where the props and costumes of the plays were stored, in the meantime, it developed into a separate structure on its own. Scholars argue that what clearly separates the Greek theater and Roman theater is this section. In the ancient Greek theater, skene is not in the frame, but it is imposingly built in the Roman theater. 8

According to Roman architect, engineer, and writer Vitruvius who lived in the 1st century B.C., in the middle of the skene, there were ornamented double gates like the ones in the royal palaces. There were the doors for the guest rooms on the left and right, as well as there were places reserved for props in the back. During the shifts to the next play or the scenes in which gods appear amidst sudden thunders, these structures were turned around to show the audience a different scenery. In the back of these parts, there were large planes extending from the forum or the outside of the theater to the stage entrance. The decorations and schemas of tragedy, comedy, and satire plays did not resemble each other. Tragic scenes were marked by columns, pediments, sculptures, and other objects worthy of kings; comedy scenes showcased common people’s private mansions with terraces and window views; on the other hand, the scenes in satire plays were decorated with numerous pastoral images in the form of landscapes displaying trees, caves, and mountains. 9

If we vertically cut in half the photograph showing the stage building which is full of triangular pediments, columns, sculptures, and reliefs, we get almost the same two images. This rather annoying symmetry was an important factor in architecture and painting during art historical periods like Renaissance and Neoclassicism since antiquity. Architectural elements like triangular pediments and columns are widespread now in almost every present-day city. When these are photographed with an emphasis on their symmetrical composition, the ancient theaters in question turn out to be sources of the visual culture in Europe.

It is certain that the clearly unnatural light reminiscent of a Baroque style in Hütte’s photograph creates a dramatic effect. Hierapolis means “holy city” and the settlement is located near Denizli. I had visited this ancient town seven years ago on a hot summer day when it was quite crowded. As soon as I have seen Hierapolis, Night, I aspired to visit this place once again under the moonlight. Things that effortlessly embrace what is mystical, metaphysical, or contemplative and make you sense that “there are things beyond other things” continue to arouse my interest despite their unnerving symmetry and sterility.

2- Nowadays Hütte shares the same studio with Gursky and Ruff.

3- İpek Çınar, Landscape is the Perfect Topic to Fail: An Interview with Axel Hütte, https://www.borusancontemporary.com/en/blog-landscape-topic-fail-interview-with-axel-hutte_2004, 14 January 2021.

6- İpek Çınar, Landscape is the Perfect Topic to Fail: An Interview with Axel Hütte, https://www.borusancontemporary.com/en/blog-landscape-topic-fail-interview-with-axel-hutte_2004, 14 January 2021.

7- The structural elements in the architecture of an ancient theater are named as such: orchestra (stage), skene (stage building and props), and theatron (seating area — in Ancient Rome cavea).

8- I would like to thank my archeologist friend Umut Furkan Çıtak who answered my questions related to the topic of my analysis. 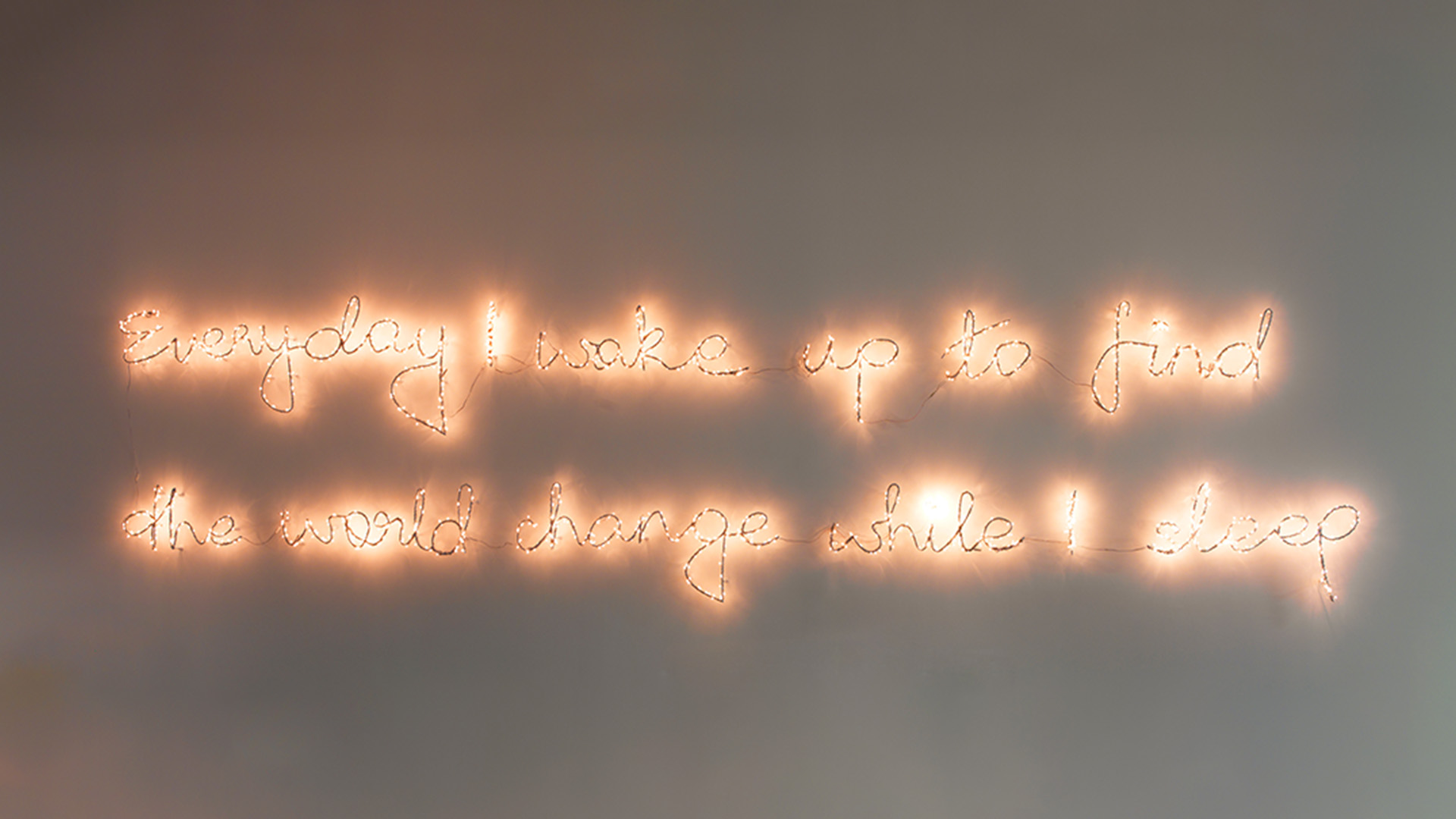 Love Versus Hate, Consciousness In Tune With Subconscious

Deniz Can analyzes Shilpa Gupta’s work “While I Sleep” in the context of dreams and subconscious.